“When was the first time you fell in love with hip-hop?”

After my deep love for funk, Charlie Wilson, Michael Jackson, neo-soul and 10-piece harmonies, production and sound engineering come in second. Growing up listening to soul and Dilla era hip-hop, NWA and 2 Live Crew, hearing Missy Elliot go bar for bar on Tigga in the Basement, watching Ma$e and Diddy dominate 106 & Park every evening during their top 10 countdown – have influenced the kind of music I have grown to appreciate and prefer. However, in contemporary terms, production value in relation to sampling, usage of real or synthetic instrumentation, and importance of polyrhythms and silence on a track have all dissipated out of music making in recent years. Though, today there still exist producers that are dedicated to their musicianship and crafting of sound for dynamic track building.

Here are my draft picks of the decade’s most celebrated producers that made me fall in love with hip-hop: 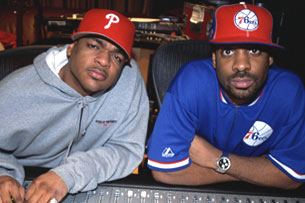 Don’t recognize the pair? Well, I didn’t either until I got curious of who produced Marsha Ambrosius’ “Your Hands.” Andre Harris And Vidal Davis have been the main producers to Jill Scott (practically all of Who is Jill Scott? Vol. 1) and Glenn Lewis, as well as been responsible for some of the most successful artists in the music industry, period: Alicia Keys (“So Simple”), Charlie Wilson, Usher (“Caught Up,” “Super Star”), The Game, Destiny’s Child, Monica, Chris Brown (“Yo“,”Poppin’“, “Hold Up”, “Apology”), Michael Jackson (“Butterflies”). The list scales all the way up to the heavens. As multi-Grammy Award winners, I have the highest respect for these two masterminds.

Having already mentioned my shameless joy for gangster rap in my youth with NWA, Mobb Deep, Dipset and G-Unit (and some Tupac, never really became a fan until college though), Dre is an obvious pick for one of the top producers active in my lifetime. Generationally speaking, my first impressions of Dre were his work via Aftermath Records, watching him build an empire and create his frankenstein that would eventually lead him to sign one of hip-hop’s most lethal lyricsts – Eminem. Being under Interscope Records, my love for the OG rapper could be biased, though, valid in regards to the sorts of sound he has brought to the industry in the last 10 years. Kendrick Lamar is an obvious spoiler for my decision, the label taking on the industry’s poster boy of eclectic lyricism and classic maker from records like “Compton,” and “The Recipe”, hearing traditional West Coast style production laced and infused in every 808 and snare throughout each track. Aside from being a savvy businessman and smart engineer, Dre remains a gem to the industry in the ways he develops his artists. He’s been a little quiet in the past year after good kid, m.A.A.d city, though, we all know he’s probably up to something incredible and will release his gold into the airwaves like a thousand dove storm sooner than we think.

Virginia Beach’s Skateboard P, father of the “Neptunes sound” after releasing N.O.R.E‘s “Superthug” in ’98, screaming “Starrrrrrrtraccccccck!” over the beat, Pharrell is probably the most iconic on this list, though, I consciously could not place him over his predecessors that came before him. After doing a little digging, I realized that Williams has produced practically every rapper and singer that I have crowned king since the 7th grade. From Clipse, Snoop Dogg, Jay Z, J. Lo, Madonna, Daddy Yankee, Daft Punk, Travis Barker, Cam’Ron, Ma$e to Kanye, his catalog extends into a universe only fit for a “Neptunes sound” that reaches beyond silence and noise. We all remember attempting (or succeeding) to remake the “Grindin'” beat on our lunch tables or desk tops in middle school, being delinquent to “Drop It Like It’s Hot” in the summer of ’04, back when Pharrell was the Kanye of music before Kanye was Kanye, melting everything he touched into a multi-plantinum record.Unfortunately, I haven’t taken much time to listen to Girl yet. Though, like most artists with a sterling track record like P’s, I had to name him on this list. It just seemed, so necessary.

Despite being remembered for Jay Z publicly humiliating him on stage at this year’s Grammy’s, The Dream is one of the most respected creatives in music making. I recently listened to IV Play thoroughly and realized how brilliant this guy is. From his work on Cruel Summer, chart-topping singles from Rihanna (“Umbrella”), Beyoncé (“Single Ladies”), Brittany Spears (“Me Against the Music”), to his own records that featured some of the industry’s top artists like Mariah Carey, Kanye West, 2 Chainz, Jay Z, Kelly Roland, and Gary Clark Jr., he literally has killed the game for cadence, consonance sound and melodic hip-hop on every track he has touched in the past 10 years. Nothing less than incredible, The Dream surely has a very long career still ahead of him.

Everybody knows that Ye was a producer before he started rapping and signed to Roc-A-Fella Records as an artist who had already done amazing work with the label’s charting artists. Best known for playing a key role in the production and success of Jay’s classic album, Reasonable Doubt, Ye is also remembered most for his eclectic sound and ingenious work with post-Dilla artists like Common, Slum Village, and Talib Kweli, as well as others who have appeared on his albums such as: John Legend, Kid Cudi, Alicia Keys, Beyonce, Paul Wall, Dwele, Jamie Foxx, Rihanna, DJ Khalid, Lily Allen and so on. His laundry list is so extensive, it would be almost repetitive to list all of them, as most have collaborated with him on production on other projects for extended amounts of time. Kanye is clearly a musical genius, someone who isn’t afraid to be dissonant if it will make for a dynamic beat. His label G.O.O.D. Music is a crystalized manifestation of such a claim. Being a protégé of No I.D., we’ve already seen his brilliance through The College Dropout, Graduation, Late Registration, My Dark Beautiful Twisted Fantasy, Watch The Throne, Cruel Summer, and Yeezus. And as of recent, his latest feature on Rick Ross’ Mastermind, “Sanctified,” was deemed a classic by listeners, especially after executive producer of the track, DJ Mustard, expressed to the public that he “couldn’t recognize the beat” after Kanye switched up the flow on his verse. I can personally attest to this from listening to that track every day since the album dropped. I wouldn’t be surprised if Yeezus decided to write a classical album with the world’s greatest composers, starting a new trend where rappers perform shows in Opera houses, using orchestras instead of midi keyboards and synths. I’ll give Ye 5 years to accomplish this.

I don’t think I’ve listened to a track that was made between 1999 and 2006 where I didn’t hear “JUST BLAZE!” blare out of the speakers before the beat dropped. Hailing from Paterson, New Jersey, Just Blaze is one of the most iconic producers of hip-hop, period. His brilliant percussion and careful crafting of beats for the first two Blueprint albums, as well as Jay’s record he claimed he would retire with, The Black Album, Blaze has literally taken the industry by storm with the sorts of music he has produced for his listeners. From as recent as K. Dot’s “Compton,” Cruel Summer‘s “Gotta Believe It”, scaling all the way back to Diplomatic Immunity, Harlem World’s The Movement, Big Pun, Busta Rhymes, Memphis Bleek, Prodigy (Mobb Deep), DMX, Trina, Snopp Dog, Erick Sermon, Mariah Carey, Fabulous, Usher, Rah Digga, The Game, Kanye, T.I., Diddy – this man has transformed tracks into diamond mines with his engineering. I started paying him more mind after his work on Drake’s, “Lord Knows,” showing off to listeners that he still has the 808 game on lock. As a singer-songwriter myself, I can attest to the fact that the most important member in the band is the drummer, the one keeping rhythm and tracking time with the bassist. Also for the fact that he’s from my home state makes him a local legend. Salute.

The man from the big VA, Timbaland is unmatched in his production, sound, and overall creative genius in the methods of creation used that I have no valid vocabulary to describe with. The moment I heard “Are You That Somebody?”, I figured out that one of the main instruments he uses in his beats is vocals, thus instantly converting me into a loyal fan to his sound forever. Infamous for his work with Aaliyah on her most successful album to date, One in a Million, and Missy’s Supa Dupa Fly, Timbaland is a veteran to this industry, killing the looping/beat building/mixing game with his distinct engineering techniques that have made some of the most classic records in music history. His list is way too long to go over, but, top 15 artists that are worth mentioning goes as follows: Genuwine, Jodeci, The LOX, Nas, Boys II Men, Soul Food/Booty Call/Money Calls/Nutty Professor Soundtracks, Janet Jackson, Ludacris, Alicia Keys (Diary of Alicia Keys), 50 Cent, Björk (Volta), New Kids On The Block, Wyclef Jean, Drake, Jay Z, and of course, Justin Timberlake. We all know how integral Timbaland was in resurrecting Timberlake’s career with Future Sex/Love Sounds and 20/20 Experience. Apparently he will be producing Missy Elliot’s newest project, as well as Kat Dahlia’s My Garden. Get ready for a good year of music.

Last but not least, we have J. Dilla as the number one iconic producer in hip-hop history. He literally ushered in a new sound that no one was using or attempting to develop in the 90’s when gangster rap and pop music production were streaming farther away from real instrumentation and musicianship at the time. The God Father of soul-hop, Dilla-era hip-hop was one of the most legendary in music history that purposely created community in the industry where feuds and beefs were escalating out of control due to insensible geopolitics between artists on the West and East Coasts. A Tribe Called Quest, De La Soul, Busta Rhymes, Erykah Badu, MF Doom, The Roots, The Pharcyde, Common, Talib, Mos Def – Dilla made music for the soul, produced and engineered with a love rooted deep within the veins of hip-hop, fathered and raised sound like his first born. After attending the J. Dilla Foundation’s first annual NY Loves Dilla benefit concert in March, I couldn’t believe how legendary this man was. He made classical music from sampling the lived experiences of his people and transforming them into sound, remembering to never limit himself to one kind of aesthetic, and simply turned rocks into gems. Dilla’s spirit clearly lives on and manifests within the gutless nostalgia of my generation that longs for the hip-hop they heard growing up as 90’s babies, filled with soulful hooks and beats that could throw a grown man back to the moment he heard Excursions or Labcabincalifornia for the first time in pampers. Unmistakably one of the best to ever do it, long live Jay Dee.

Here’s a compilation from the team at EARFLOAT Radio™ with music from these producers in one playlist. Enjoy.

BEGINNING OF AN ERA MIX