This year’s Cinco De Mayo wasn’t marked by our nation’s natural inclination to misappropriate history with grand festivities, binge drinking, and clearance sales at Aldo. Rather, America was confronted with a more subtle taste of history, bitter with dark realism and overt criticism of our country’s problematic past with its previous and ongoing relationship with chattel slavery, oppression and exploitation of marginal communities and Third World peoples, all in the form of an art installation in a sugar factory in Brooklyn. 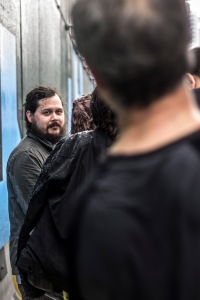 The full title of the installation was poetic at best: A Subtlety or the Marvelous Sugar Baby an Homage to the unpaid and overworked Artisans who have refined our Sweet tastes from the cane fields to the Kitchens of the New World on the Occasion of the demolition of the Domino Sugar Refining Plant. Two weeks ago, I took a semi-lengthy trip to Williamsburg via bus to Kent Avenue, where the exhibit was installed, and is also home to the infamous 285 Kent, recently shut down for reasons unknown to myself. But being a Stan for Kara Walker’s work, I knew that she was going to be present at her own installation in a neighborhood about 15 minutes away from my homestead, so that was enough motive to roll out of bed and trench through the pouring rain – no raincoat, locs super wet, my Everlasts soaking into my socks. I finally found the line at the bottom of the hill leading to the factory, completely wrapped around the block, a string of black and blue umbrellas shielding bodies from the roaring storm, eager to witness Ms. Walker’s visionary work. Apparently I had missed the press conference that was held that morning, though, I had a feeling that even if I did make it to the place on time, I wouldn’t have been let in. So, like everyone else – with or without a camera and press badge – I waited in line. After about 15 minutes, the herd of people were finally brought forth into the factory, bringing them that much closer to experiencing the realities of sugar like they have never before. 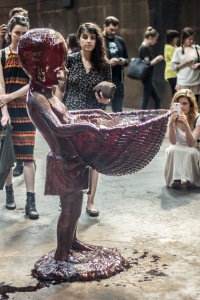 The moment I walked in, I felt an imbalance almost immediately after scoping the space. This reflex was not triggered by the multi-ton sugar and molasses figurines of young children carrying waste baskets on their backs, dripping and melting materials to the ground. Nor was it set off by Kara’s mega-sized sphinx Mammy/Jezebel/Sapphire sculpture made entirely of sugar, and most by hand. My unsettled deposition was triggered not by the space itself, but those who occupied the exhibit. For every 10-20 patrons, one was of color. Maybe. Depending on my memory, that may even be a stretch. The contrast between the dark, blood-black child worker figurines and pale skinned men and women were probably one of the first things I recognized immediately when I walked in. I began to grow curious not of the installation, but those walking around and viewing each piece, taking selfies with the dissolving sculptures, their melting material mirroring the same properties as sweat or even blood, something I knew that Ms. Walker wanted people to either recognize or realize at one point during their visit. I also began to realize that the space itself and even the people coming to visit and their questionable motives for doing so were a part of her “subtlety” theme she developed from histories drenched in racial tension, violence and oppression. 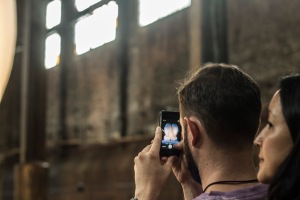 When I caught a white guy photographing the backside of the sphinx sculpture, vagina lips protruding from its region and all, I couldn’t help but die a little inside, knowing that he would never understand the explicit significance of his actions and the painful irony projected from his iPhone onto the space he occupied. Contextually speaking, this sort of exercise of privilege and disregard for the personhood of the black female body doesn’t begin with the video vixen, refracted Jezebel caricatures in Tyler Perry movies, or even exhaustive stereotypes cycled on WorldStarHipHop or Black Twitter. We’ve watched this embarrassing monster of misrepresentation and appropriation shift and transform all throughout world history, from the first glance of the Venus Hottentot by European travel writers and explorers, all the way to constructing the ugly trifecta of the black woman on screen and in our nation’s economy, seeping down into the imagery projected on our smart phones, social network platforms and web browsers. Our vision is continually populated with distorted ideas of black female sexuality, as well as convoluted ethics of exported labor. And with this bombardment of inconsistent imagery, we filter and yield conclusions based on majority opinion of whether to entertain some and dispose of others. 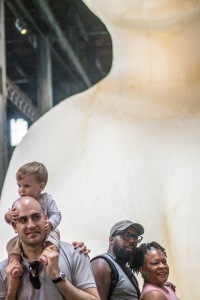 Privilege was definitely another theme scaling the significance of the space, totally made prominent and apparent by the types of people patronizing the arena. I had to remember and consider the location of the exhibit, as Williamsburg is the poster child for gentrification in its most successful form; so attracting upper-middle class, work-from-home, daddy-pays-my-rent-and-utilities group of guys and gals couldn’t have shocked me any more than it had even before I realized all of this. From the symbolism extended from the space itself – a Domino Sugar factory that use to house some of New York City’s most hard working labor forces, transforming brown sugar cane into white crystals, resold to Americans so far removed from systems of exploitation and oppression – all the way to the immediate context of Cinco De May 2014, a holiday still misunderstood by most citizens under 30, Kara Walker’s exhibit was far from “subtle” in objective. As citizens of the West, as well as byproducts of empire and imperialism, the unconscious consumer in our contemporary global economy remains incredibly underwhelmed of their role in the continual repression of black and brown bodies working to keep their seemingly free-trade coffees and expressos sweet, and neighborhoods free of the people who are responsible for their comfortable lifestyles. 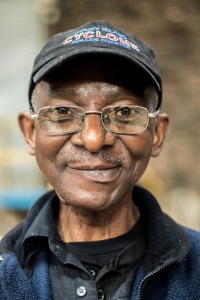 Walker’s exhibit spoke very stark volumes on the current status of race relations, how we position and juxtapose our identities with the sorts of images we consume and produce – independently or collectively – as well as how we fathom the phenomena of space and time. The spaces we occupy undeniably dictate and configure our understandings of time and its role in either sharpening or abstracting realities found within or external to ourselves, figuratively and/or literally. I was most interested in how those present appreciated their surroundings, I eventually finding myself speaking with an older gentleman who claimed to have worked in the factory all of his life and is now collecting benefits from his blue collar career back during the economic boom of the 40s in post-war America. Shelton, the elderly black man with a warm smile and patient posture, explained to me his experience setting up the exhibit as a volunteer, how the space brought him back to his time as a younger, more vibrant version of himself, working to make a living in a space that gave him economic liberty, yet living during a time that didn’t allow him to liberate himself with the power of the dollar alone. So, that dynamism and insight into the warped relationship between space and time was both helpful and and intriguing, especially hearing from a primary source like Shelton.

And as I remember leaving the factory, I walked past an ice cream truck where I spotted a middle-aged black woman serving a young white girl right outside the gate. The irony couldn’t even finish crystalizing and freezing over my nerving experience in the exhibit. My logic was left unchallenged and I decided to journey back to my neighborhood over the Pulaski Bridge, into my own gentrified playground of Long Island City, all the while melting into bitter sweet thoughts of pride, prejudice, and a whole lot of “What Would Walker Do?” 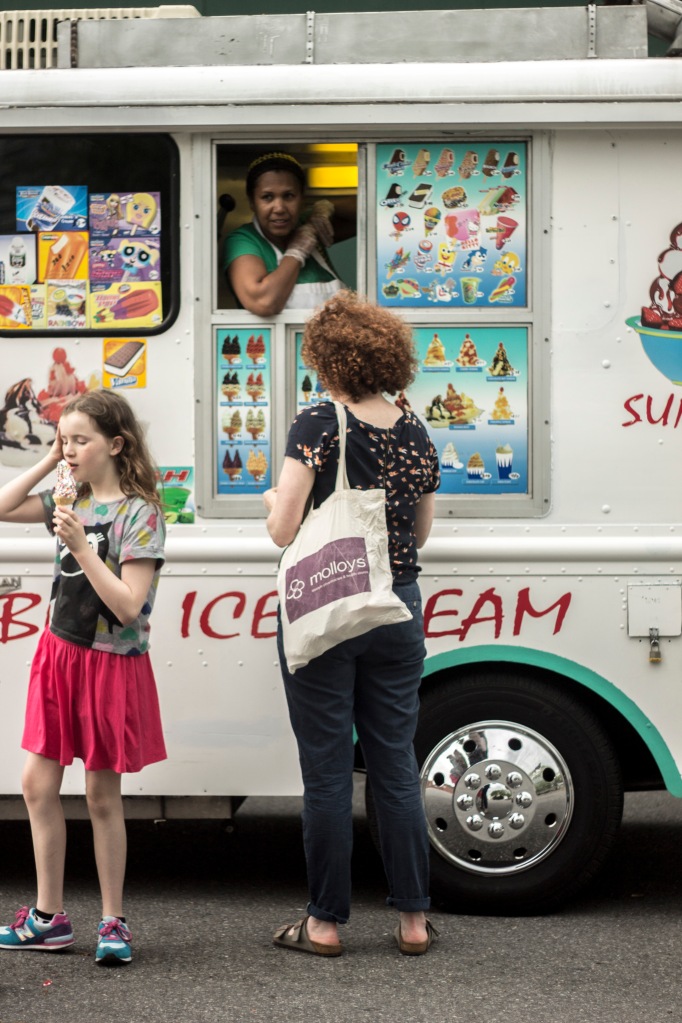 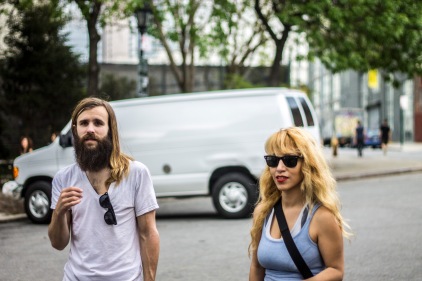 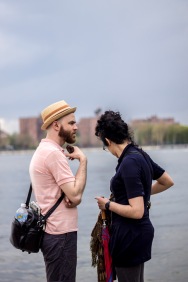 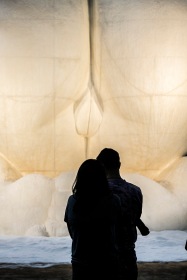 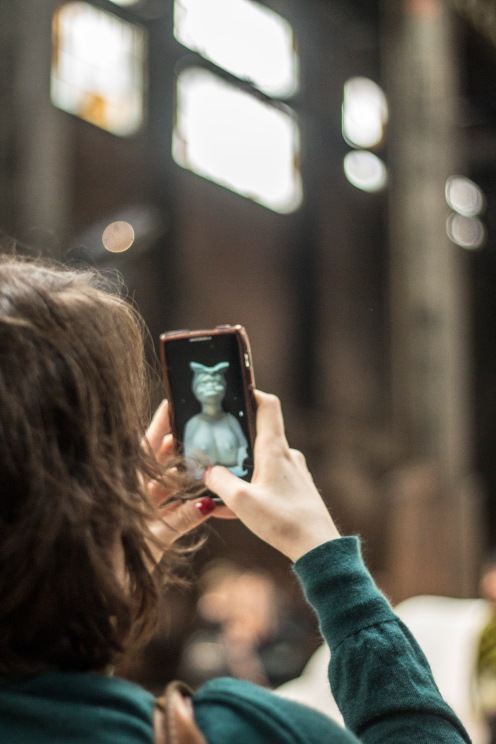 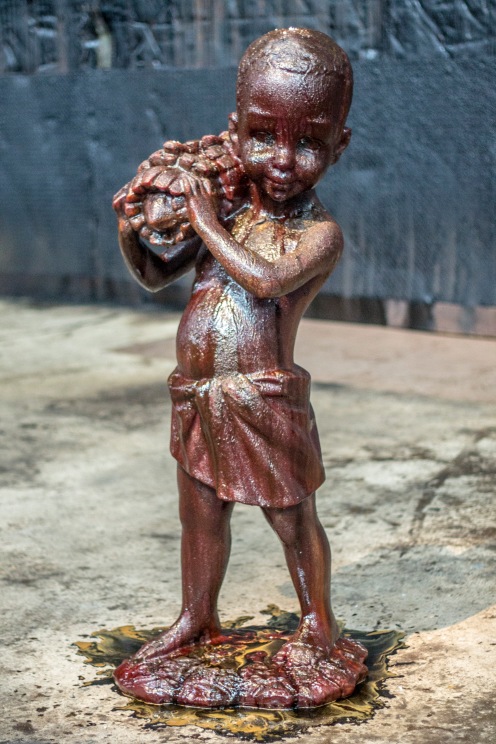 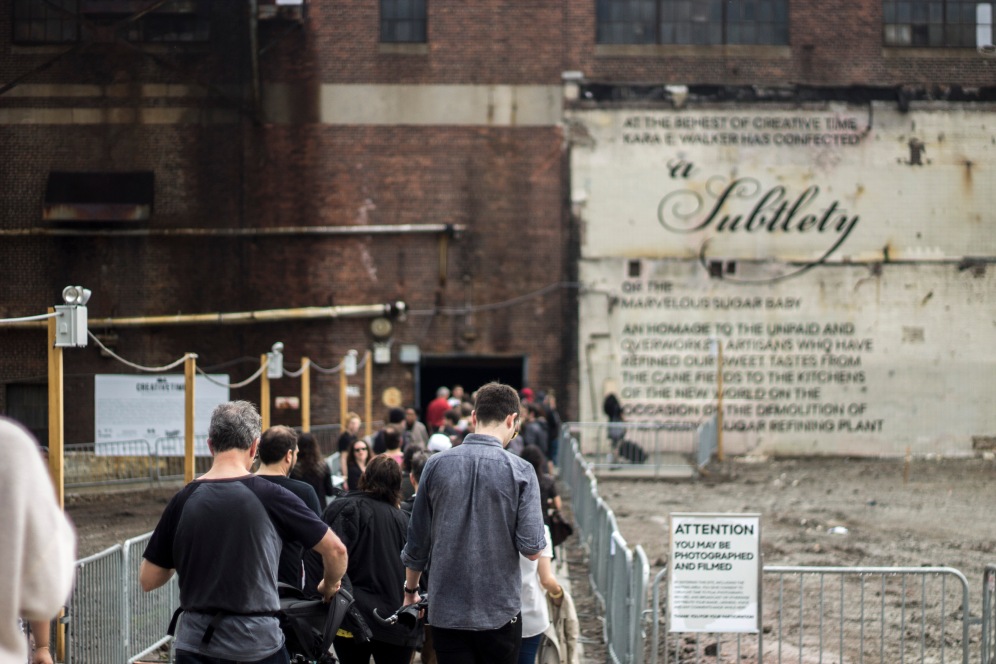 For the rest of my photo documentation of the exhibit, visit my portfolio at www.nmusinguzi.com.